Once you have cut each chime to length and you are happy with the tuning, you need to drill holes into it so that the note can be held in place as it is being hit. The right place for these holes in 0.224 of the way in from each end, or 0.224 and 0.776 if you measure both holes from the same end. It’s the same thing. Use a tape measure to mark two thin lines on the pipe, trying to keep them as near as possible on the same side. 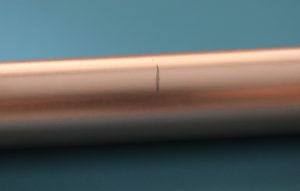 Then slide the two PipeDrillJigs onto the pipe, one each end. Look through the holes until you see the pencil lines and slightly adjust the jigs so that the pencil lines are both central in the holes and the pipe with the two jigs attached lies flat on a table top without rocking.

It is important that the drill jigs are a tight fit on the pipe. If the jigs can shift part way through drilling, the holes won’t line up. Drill the two holes on the one side of the pipe, then flip the whole  assembly over, and drill the other two holes from the other side. Do not disturb the jigs on the pipe until all four holes have been drilled. Try and keep the drill as perpendicular as you can to the pipe. 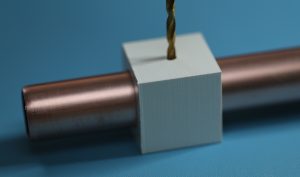 The drill bit size is defined by chimeMountHoleDiameter in the OpenSCAD code. This same variable changes the width of the pins on the UpperChimeSupport, LowerChimeSupport, and also the holes in the PipeDrillJig.

Do not try and drill all the way through both sides of the pipe in one go. Any slight misalignment will mean the hole on the far side will end up in the wrong position, and the burr formed as you push through the thin metal will stick out of the pipe rather than stick in. This will make it difficult to remove the alignment jigs and create a potentially dangerous sharp edge.