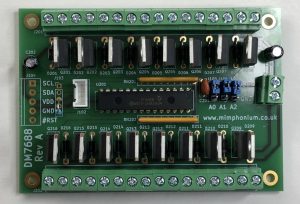 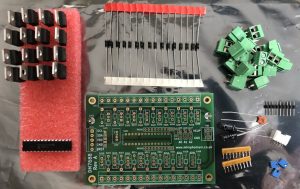 The photo above shows the kit of parts needed to make a fully populated DM7688. It contains:

To assemble the board:

Before assembling the board, ensure the PCB is clean. If there is any slight corrosion or fingermarks, clean it with a pencil eraser.

Start assembly with the lowest profile components first (the diodes) and build up to the tallest components (the MOSFETs).

The diodes on the PCB silk screen are labelled D201 to D216. Bend the legs of the diodes so that the legs are spaced the same as the holes in the PCB. Insert them into the holes in the PCB. Note that the diodes are polarised. That is there is a right and a wrong way to fir them. Orient them so that the grey stripe on the diode corresponds to the white stripe on the PCB silk screen. On the rear side of the PCB, bend the legs outwards so that the diodes stay in place when you turn the board over.  Solder each of the diode legs into position. Wearing suitable eye protection, cut the legs down to length.

The next tallest component is the Microchip MCP23017, designated U201. The legs of the chip are slightly splayed as supplied. They need to be bent inwards so that they are straight and parallel with each other. Unfortunately, the PCB lacks any orientation markings, and even more unfortunately, the correct orientation is such that the writing on the chip is upside-down relative to most of the writing on the PCB. To fit the chip the right way around, make sure that the dot in the corner of the chip is at the end nearest to  C201. Hold the chip in position with the board turned upside down, and tack one of the pins in position with the soldering iron. Double check the chip is lying flat, and solder each of the other pins, and re-solder the first tacked joint. The legs are short enough that there is no need to cut down the pins.

The next components are the two resistor networks, RN201 and RN202. Again there is a right and a wrong way to fit these parts. On one side of the parts, there are identification markings, including a dot to mark pin 1. On the PCB, one of the holes has a square surround unlike the round surrounds on the other 8 holes. The square hole is pin 1. Again, tack the first joint before soldering all the others. again, there is no need to cut down the pins after soldering.

The next components are the screw terminals. Fit J101 first. Make sure that the holes where the wires enter are on the outside of the board. J201 and J202 are for 16 way connectors. These can be made up from the 2 way connectors by sliding the parts together before soldering.

C201 is the ceramic capacitor. This works either way around.

J106, J106 and J107 are made by snapping the 9 way 0.1″ connector strip into 3 pieces with 3 pins each. When soldering these parts, it is important to keep them as perpendicular to the board as possible. If they are bent over too much, then it will be difficult to fit the jumpers later.

J102 is the Seeedstudio Grove connector. This part has a right and a wrong way round, and unfortunately, there are no clear markings on the PCB. The correct orientation is with the cutout and the polarising indentations on the side nearer to J103 and J104.

J103  and J104 are alternatives to the Grove connector. You could either solder in an alternative connector, or even solder wires straight into the holes.